The beggar and his lavish banquets

In what appears to be a classic case of opposites attract, the more brutal a dictator gets the more appealing it becomes to the “democratically elected government of The United Kingdom.” Every government that comes to power in this country fails to understand that every human being in Africa also yearns for freedom, justice and equality just like in the UK.

In our past appeals, demonstrations vigils and even hunger strikes, we tried to inform the UK authorities that democracy has no colour. 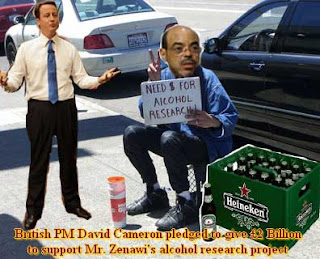 We have been shouting that democracy in Afghanistan, democracy in Iraq, democracy in South Africa is equally needed in Ethiopia too. It seems that Dictator Meles Zenawi has become a more favourite dictator the more repressive and ruthless he gets. His heinous crimes have been his badge of honour in the eyes of the UK government. Many Ethiopians thought that it was just Tony Blair who had fallen in love with the midget of Addis that has been terrorising our people, but alas, David Cameroon has become far more generous to a tyrant than his predecessors. That was actually why Jason Groves of Daily Mail had pointed out:

“The Prime Minister was forced on to the defensive over the controversial decision to lavish billions of pounds of taxpayers' money on foreign aid at a time when services at home are facing unprecedented cuts.”
This point has also been spelt out clearly earlier by William Easterly. What a double standard! The cry of UK Government about Mugabe is just nothing but a lip service - at the bottom of their heart their fury stems from his refusal serve them. What a shame!

"TPLF had a big thank-you day on March 8"
The TPLF Embassy in London had a big “Thank you” banquet on 08 March 2011 to the British Parliamentarians at Westminster. In Washington, they have DLA Piper owners running on the corridors of Washington to prevent any law from passing by the US Senate for a fee of US$50,000 a month. In the United Kingdom, they found this service in the image of Mr Laurence Robertson, MP of Tewkesbury, who could do anything for Woyyane but his deals smells of a rat. The Ethiopian tyrant can count on Mr Robertson, lobbying other fair minded MPs to galvanise support for himself and his tyrant and dictatorial regime. Therefore, one of the methods used to influence the MPs was assumed to be a lavish dinner banquet in the Westminster Hall, financed by fraction the US $2 billion bonanza that Peter Heinlein of VOA recently informed us was showered down on Meles’s head by the UK. At home that money could have saved thousands of jobs and kept many much needed services running.

Ethiopians from all over the UK invited each other on Tuesday 8th March 2011 and gathered at Parliament Square starting from 4:00 to talk to the conscious minded parliamentarians who may turn up to wine and dine with the child killers. Thankfully they did not turn up in big numbers. The Parliament Square had been occupied by all sorts of protestors. Therefore we were allotted the entire Old Palace Yard where we could even park our cars that brought placards, slogans and rally materials.

The protesters were also planning how to conduct their mission
The guests started arriving at 6:00 pm. Not all guests were going to Ambasador Berhanu’s gala ceremony but to various events (We've now an unconfirmed report the ambassador would soon be leaving his post). In fact, there was only a handful who turned up for the dinner. Our boys and girls intermingled with crowd and lined up to get in. Some managed to successfully pass the gate into the inner yard. Among the crowd Mrs Svetlana Mamedova/Sabra Mohamed, the Georgian-Ethiopian who had organised most of logistics for us spotted the usual Woyyane tool, foot soldier Yalew Kebede and started screaming at him in Amarigna. Yalew is an amazing human being. You call him whatever name you like, his response is one. He grins back at you like a fool and there is nothing you can do about it. The guests going to various events started asking what was going on. Our boys and girls seized the chance and started explaining everything to everyone and distributing the leaflets. That was an unexpected blow to Woyyane foot soldiers. Once a couple of hod-aders passed the security and went inside the dinner hall, Yalew spotted some of our boys and girls sitting pretty inside and called the police to escort them out. Our delegates came out smiling because they had already delivered the leaflets and we had our last laughs. 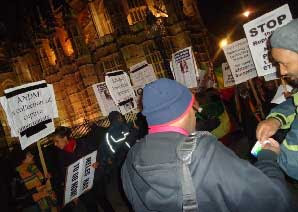 Since there were many activists within the crowed there were actually few of us at the Old Palace Yard. Our boys and girls were doing fantastic job of embarrassing any party goer and forcing them to go back. One former respected member of our community was spotted rushing to get in, only to be confronted by our younger activists like Abebe Tolessa and others. They quickly greeted him where he was going as the Old Palace Yard was on the other side of the entrance. He told them that he was invited by a “ferenji friend” (to mean non-Ethiopian) to a dinner party. As if he did not know what was going on, they started telling him that it was a Woyyane dinner party and that he was actually tricked. He immediately claimed innocence and disappeared from the place. Our boys came back laughing to tell us the story.

The protesters warned the MPS against dining and wining with the agents of dictators. The demonstration was lively. The protestors demanded not to wine or dine with agents of dictators. They called upon the members of the UK Parliament to stand with democracy and not with the tyrant. Many of the protestors (some came as far as from Leeds and Manchester) had already sent a protest letter to their MPs and received acknowledgements. Many of the MPs assured us that they would not be attending that dinner that night, and would “not be doing anything to support the brutal regime in Ethiopia”. Our slogans echoed in Westminster.
Here are some of the slogans:

The VOA was recording and interviewing one of the organisers from the place (you may listen to the 9th March 2011 Amharic report). Our ESAT was there from the start to the finish. A TV channel called Islamic Channel was also there recording and filming from the start to the finish. After successfully getting across sending loud and clear message, the demonstrators dispersed without any incidence, though there was a heavy presence of the Police and security men.