Posted by Wondimu Mekonnen at Thursday, November 28, 2013 No comments:

DEMONSTRATION BEFORE THE SAUDI EMBASSY IN LONDON ON 13.11.13

Leave alone Police Force, even darkness failed to stop angry Ethiopians expressing their anger at the Saudi Arabia's killing, rape and murder of Ethiopian migrants in various cities of the Kingdom. Shame! Courteousy of Alebachew Dessalegn

Posted by Wondimu Mekonnen at Wednesday, November 27, 2013 No comments:

ETHIOPIANS COME IN UNISON AGAINST MURDERERS AND RAPISTS OF SAUDI ARABIA

ETHIOPIANS COME IN UNISON AGAINST MURDERERS AND RAPISTS OF SAUDI ARABIA 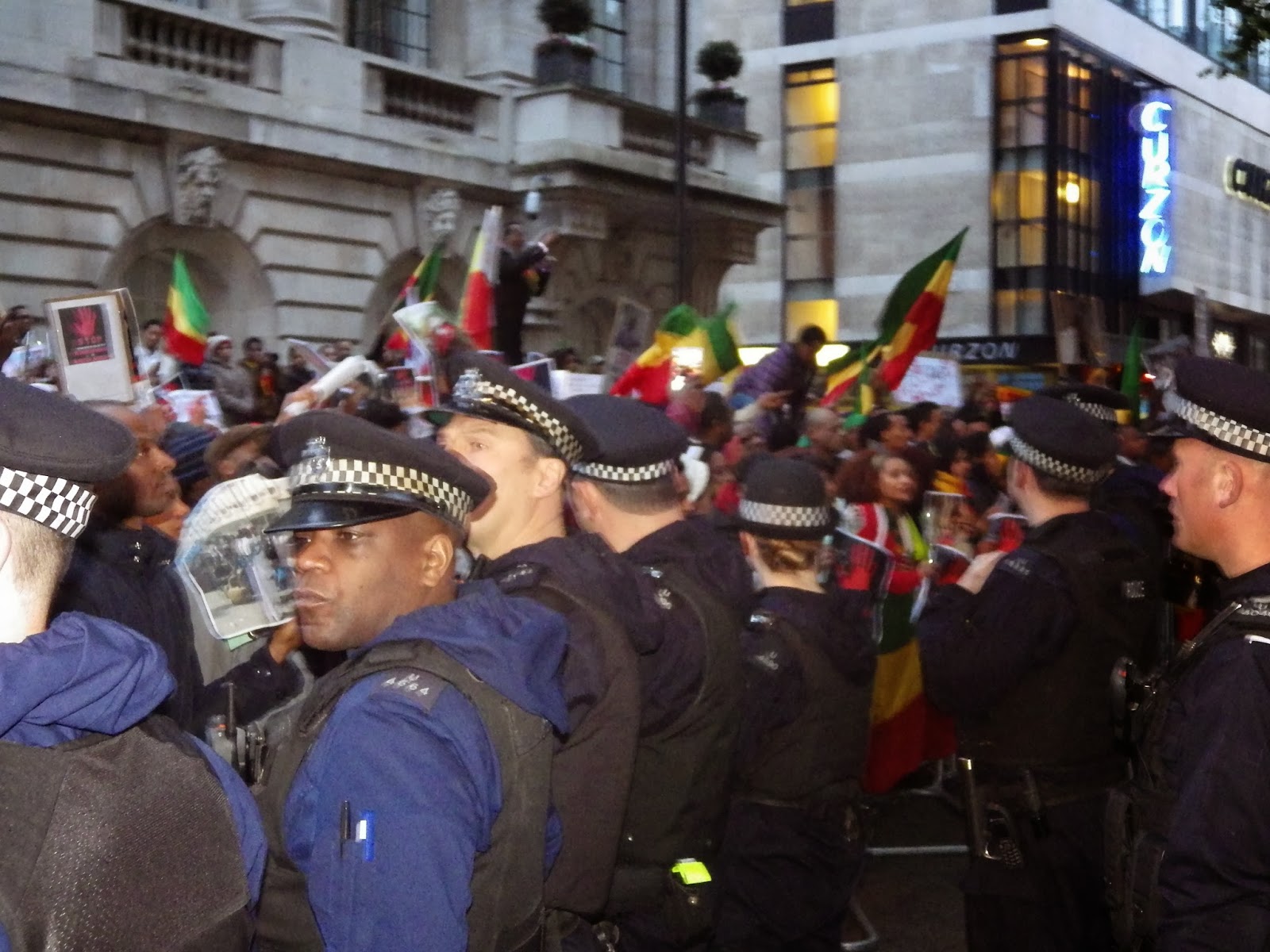 Ethiopians are protesting in thousands against the ongoing murder of our men and gang rape of our women, incarceration of our brothers and sisters in subhuman and degrading conditions by Saudi authorities throughout the main cities of the world. London is not an exception, except that the turnout has not been witnessed anywhere in the world! Hundreds of metropolitan police in yellow reflective force failed to contain thousands of protesters, therefore a special force in black, armed to the teeth in riot gears, took over to manage the crowed and protect the Embassy of Saudi Arabia from angry and outraged Ethiopians.

Today’s demonstration is unprecedented. According to a friend who had a good view from a higher platform, four to five thousand strong men and women turned up at the Saudi Arabian Embassy. Ethiopians put aside their petty differences for the first time in years and came out as one to voice for the 23,000 or so voiceless Ethiopians stranded in the Kingdom of Saudis Arabia. Political differences did not matter. There were Ginbot 7, Andinet, Southerners, EPRP, AEUP, civic organisations and so on. Religious differences did not a priest and a sheik stood side by side. There were Orthodox Christians, Catholics, Protestants, Muslims, Jewish and others. Ethnic difference was not an issue. There were Amaras, Oromos, Gurages, Tigres, Hadiyas, Kambatas, Adares, and all representatives the 80 groups ethnic groups were glued together as Ethiopians. Ethiopians are obviously outraged by what had happened in Saudi Arabia to their brothers and sisters. There is a common cause to stand together. The SOS call from Saudi Arabia was too loud to ignore! London Ethiopians made their point! They demanded to stop the murder and rape of Ethiopians.

Ethiopians demanded that the Saudi Government instruct its Police force to stop brutality against Ethiopian migrants. The Saudi Police were not only breaking into houses of all Ethiopians, whether they had residence permit or not, but summarily rounding up, beating up and killing in cold blood. In one gruesome video, there is an incident where an Ethiopian man was beaten up, forced to carry tyres and set alight to burn alive. Who would expect such savagery in 21 century? This brutality has been witnessed by somebody who was video-taping the whole incident and shared. Once the men are rounded up, the women are left for the Arab Youth gang galled “Sabab” to take the women and gang rape them, at the watchful eyes of the police. This is a disgrace! This is national humiliation for Ethiopians. This is something Ethiopians could not step aside and ignore. That was what brought them united. Watch the following video:

An Orthodox Priest, Kesis Berhanu Bisrat encouraged Ethiopians to stand together and voice for the 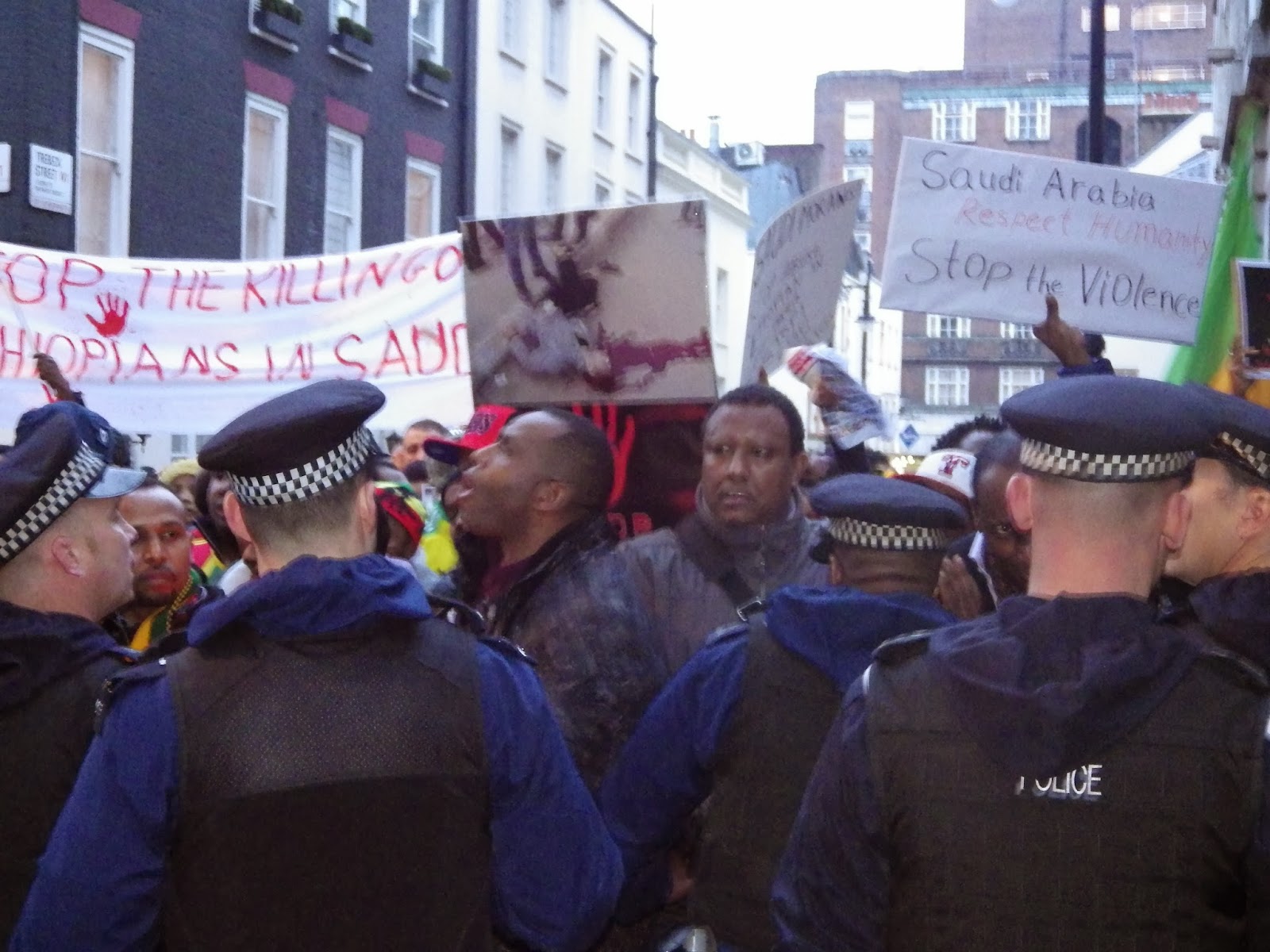 voiceless. He led prayers for the victims. A Muslim brother electrified the crowed with a very uplifting speech touching on everyone’s heart, stressing on our past glory, the kindness of Ethiopians, who took in persecuted Muslim immigrants from the First Hijira, brutalised  Greeks and Armenians. He questioned the Saudi Arabians, if that was the reward we deserved, for the charity Ethiopians showed to the Muslims, to preserve the faith that the Saudi Kings claim today to be protector of Islam. The Muslims of Ethiopia are outraged by what had happened to our brothers and sisters in Saudi Arabia. He stressed on the unity of our people, whatever happens, as at any time in our history and concluded, with “Allahu Akbar!” The crowed repeated after him.

The Police escorted representatives of the demonstrators inside the compound to hand over a protest letter to the Saudi Arabian Embassy. They were reluctant at first to receive the letter as civilized members of the world. However, one way or another the letter was delivered.

There were BBC reporters, ESAT and other on the spot. BBC captured the following.

In the meantime, the actions of the Woyyane regime are shameful. As if the regime’s crackdown on Samayawi Party protesters at the Saudi Embassy in Addis Ababa last week was not shame enough, the regime is attempting to cash on the misfortune of our brothers and sisters in Saudi Arabia. It has shut down its Embassy in Riyadh for the last four days providing no services at all, so that it would gain an opportunity to milk the international community for hard currency with an excuse to repatriate the Ethiopians. The Saudi’s are ready to transport Ethiopians, but reports reaching us reveal that the Woyyane is deliberately avoiding processing travel documents, with the lame excuse of difficulty to prove victims’ Ethiopian identity. God! Can’t the regime tell Ethiopians from the rest of the other nations? Had there been any trace of Ethiopian DNA left in the blood stream of Woyyane traitors, the brutal action of Saudi Arabia would have enraged them, and forced them to scramble on bringing home their citizens safe. It hurts to hear that Woyyane blurting “Saudi Arabians have the right to deal with the illegal immigrants!” We all know they came to power with Saudi dollars, but defending the Saudi action is unforgiveable crime in our history. Excuse me! What kind of government on earth would justify the gang rape of its citizen women by Arab gangsters, murdering of men and incarceration of thousands in such degrading conditions as the right the Saudi Arabians? Instead, maliciously, it organised its few supporters in London and sent them to 10 Downing Street yesterday, Saturday 17th November 2013, to demand that the British government help the Woyyane regime with cash so that it would bring home its citizens from Saudi Arabia. Look at this!