Sensational, eye-catching headlines can be so exciting well into the first few lines of a paragraph before one stops to notice that the fancy title is exaggerated, unfounded and unsubstantiated. Imagine the let-down, which was real in the case of the Guardian’s recent “Slaughtered Like Chickens”[1].

It is not a genuine representation of The Guardian as we normally know it, more like a dodgy social media piece from the likes of the digital Tigrayan Peoples’ Liberation Front (TPLF), the better known as the Tigrayan Peoples’ Looting Front. Does the article contain facts about an Ethiopian internal conflict or about an imaginary war between the “TPLF and neighboring Eritrea”? It takes a while to get through the waffle.

How TPLF is remembered

The more glaring question however is why the TPLF has been so desperate to bring Eritrea into its war mongering charade ever since it instigated the conflict on 4 October? Not one but three unprovoked rocket attacks were launched by TPLF onto Eritrean soil, an obvious and desperate series of attempts to lure the international community into its incitement tactics.

The TPLF is a master of lies and deceit. To use more formal vocabulary, it is a crafty engineer of disinformation and fake news with experience since its inception in 1974. The Tigray Liberation Front (TLF), predecessor of the TPLF, shared the same values of Tigrayan hegemony over Ethiopia. The two fronts shared identical objectives, met to discuss the modalities of their union, and celebrated an agreement eating, drinking and singing well into the late of the night at a TPLF camp. As custom would have it, TLF leaders retire to bed first as guests of the TPLF. All of them were massacred in their beds in cold blood. Almost the same happened to the EPRP, an opposition group to the Dengue regime operating at  Assimba, in Tigray during the same period.

An extortionist group with no regard for humanity

Journalist Martin Plaut discovered, with the help of eyewitnesses and personalities, the deceitful instructions of TPLF seniors in the years 1984/85. Cunning and extortionist, TPLF approached Bob Geldof for a share of the funds mobilized by Band Aid to feed a starving population in the territories it controlled. An entire £25,000,000[2] was diverted to purchase arms and raise interest in foreign banks for a start-up capital of the Endowment Fund for the Rehabilitation of Tigray (EFFORT), owned privately by TPLF leaders. Cash payments intending to deliver sacks of grain invested instead in bags of sand facilitated by Mr Gebremedhin Araya, posing below as a Sudanese grain trader counting his money. 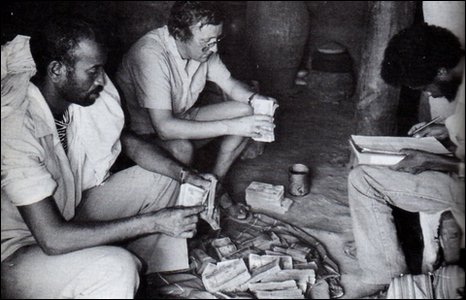 Gebremedhin Araya (L) says he posed as a merchant, but was in fact a rebel, picture obtained from BBC News Chanel.[3]

Bob Geldof forced BBC World Service[4] to apologise for implicating Band Aid as a participant in the above deception, which was against the purpose of his humanitarian campaign.

Martin Plaut’s tweets today give the impression that the TPLF have paid him a fortune to report on their behalf unlike the deadly critics they appear to have silenced such as Patrick Gilks, Cedric Burns and William Davidson. It paid DLA Piper a monthly fee of £50,000 in 2006 and, to another lobby firm called SGR Government Relations a monthly fee of £150,000 to lobby against US Congress and the State Department passing any resolution on Human Rights[5]. The funds were sourced from official international development assistance.  Global Financial Integrity, a Washington-based think tank advising on the prevention of illicit outflows said that “In 2009, illicit money leaving the [Ethiopian] economy totalled US$3.26 billion, which is double the amount in each of the two previous years.”[6]

The Guardian, one of UK’s most prestigious newspapers, fails to meet a standard of professional and ethical reporting as it prints a half-backed reporting of facts that support the TPLF machination. The article fails to offer any background of the recent conflict flare-up in Tigray region. No mention is made of TPLF officials boasting about “starting the war by blistering attack with lightning speed” on the restive Northern Division of Ethiopia’s National Defence Force. They also begged the international community to “stop the war in Tigray” after starting it[7], a tactic to facilitate the re-instatement of the power they had willingly left more than two years ago.

The article is silent about them slaughtering unsuspecting soldiers of the national army in the middle of the night, stripping the dead naked and leaving them to rot for vultures and wild animals to clear. Reuters reported quoting Lt. Gen. Bacha Debele[8], thousands more were stripped of their clothes live and forced to cross the Eritrean border at a place called Shiraro

Eritrean border guards clothed and fed them. PM Abiy Ahmed Ali and his army generals flew into the Eritrean capital by helicopter and drove to the border to witness that humiliation two days later. The soldiers demanded with valour to return to their post and subsequently forced the release of captured officers by TPLF.

The story, as retold by Alex de Waal in The Guardian, titled: “Slaughtered like Chickens” paints an unsubstantiated picture that implies Eritreans committed the attack on Tigrayans. It failed to mention that TPLF’s Special Force and militia marched to the border of neighboring Amhara region, vowing to crush the people and capture the city of Gondar by noon, Bahir Dar by evening, and topple the central government in Addis Ababa on the third day. They boasted a quick fight would secure control of the capital city.

Losses were minimized as arms seized by TPLF troops from the Northern Division were neutralized from the air. Jointly the National Defence Force and the Amhara Special Force pushed TPLF out including from the territories they had seized and forcefully incorporated into Tigray 32 years ago, namely Raya, Welkait, Tselemt and Humera.

When TPLF realized they were losing their extended territory they orchestrated an unthinkable attack on the residents of Mai Kadra. Alex de Waal does not mention how their retreating troops ruthlessly murdered 600 innocent civilians of non-Tigray origin in a matter of a few hours. It can be safely assumed that the deliberate omission of facts and selective, biased reporting is intended to portray the perpetrators themselves as the victims.

Amnesty International’s interviews with eyewitnesses in the aftermath of the Mai Kadra massacre confirms that TPLF committed the war crime. They clearly identified the perpetrators as TPLF soldiers, militias and Tigrayan youth known as the ‘Samri’.

Interviews with survivors of the massacre on Amharic Ethiopian Television showed victims corroborating the version given to Amnesty International. Other reports indicate that TPLF fighters shed their uniforms and changed into farmer’s clothing before seeking refuge in the Sudan. From there, they continue spreading disinformation and fake news. Such crimes need to be investigated by an independent group and those responsible must be arrested and tried for war crimes against civilians.

The pro-TPLF campaign by Alex de Waal is illustrated in the photograph below which he uses to call upon the international community to reach homeless refugees watching outdoor television. 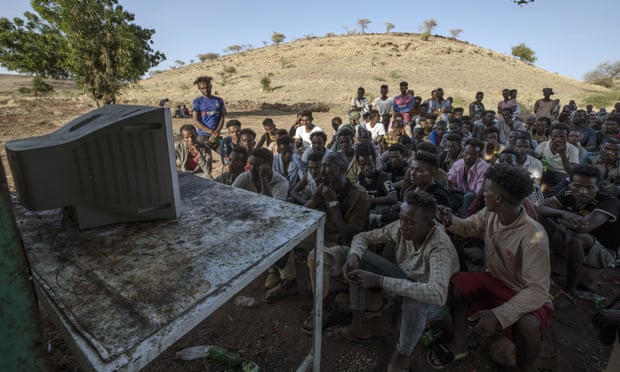 A close look at the above picture reveals that there are no women and children among the so-called refugees. Who are they? Mai Kadra mass murderers? TPLF soldiers who committed war crimes and spread disinformation through the likes of Alex de Waal?

Well, let me add one more story to this embarrassing saga. There a skirmish going in the border between the Sudan and Ethiopia, on these days that is not well publicized yet. Guess what! A fighter in Sudanese uniform was was taken prisoner on 29 December 2020. The shocking truth was he spoke Tigrinya, the language spoken in Northern Tigray, not Arabic? How I come? I leave the judgment to the reader. Here is the prisoner of in the Sudanese military uniform 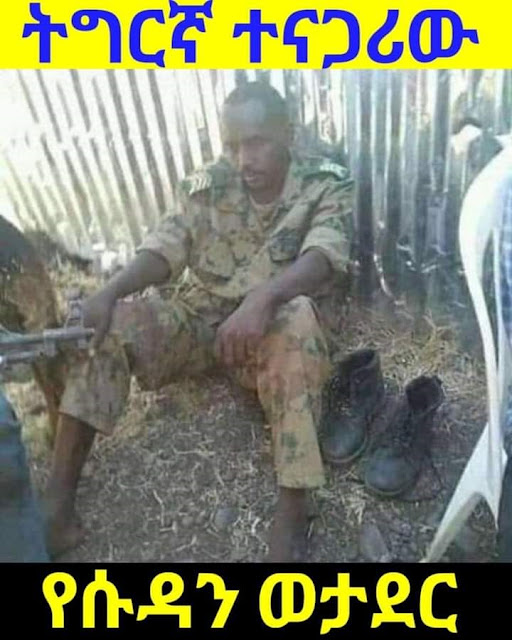 The TPLF is no different from the Khmer Rouge of Cambodia or the Communist Party of Albania. They share the same political ideology and brutality. TPLF has perfected its propaganda machine, is lobbying adventurist journalists, and disseminating its disinformation and fake news. This ruthless group need not be forgotten for callous kidnapping of foreigners such as Sunday Times Reporter, Jon Swain, in 1976.

Reporting mechanism for journalism safety but none for disinformation

Alex de Waal needs to know that the defence of the people and law enforcement does not exclusively belong to the United Kingdom. He should be reminded that the British Army was deployed in the Northern Ireland to protect the people from the IRA for several years.  He should also remember PM Margaret Thatcher ordered the British Army into The Falkland Islands in 1982.

Alex De Wall ignored that African countries are watching what the TPLF had done for 27 years in neighboring countries, as well as to Ethiopia, and what it has been doing over the last 2 and a half years. At the 38th IGAD Extraordinary Summit of Heads of States & Governments of IGAD which kicked off on 20 December in Djibouti, Chairperson of the African Union Commission Moussa, H.E. Faki Mahamat commended the Government of Ethiopia for its bold steps to preserve the integrity of the country. He also stressed the need to sustain efforts to help solve the issues of affected people in the aftermath of the operation. TPLF disinformation has no place here.

The possibility of civilian causalities in any conflict is evident, however, the Ethiopian Defence Force kept this at an absolute minimum. Alex de Waal claims that Eritrean refugees camped in Tigray are being forcibly “returned“ to Eritrea but his evidence mainly comes from TPLF sympathisers residing abroad. Who is he sympathising with? The Eritrean refuges or the TPLF? He again accuses Eritreans, not the Ethiopian National Defence force, for the killings and lootings in Tigray. Nevertheless, the looters and killers are the TPLF themselves as evidenced from first-hand accounts coming from Tigray.

Alex de Waal claims that aid workers and diplomats have reported that the law enforcement operation involved thousands of Eritrean soldiers undermining a population more than 114 million strong against Tigray’s 7 million amounting to just over 6%. The Ethiopian National Defence Force is well trained and equipped serving an impeccable record beyond sovereign borders and with a capacity to deploy peace keeping missions in Somalia and South Sudan.

The Guardian’s report by Alex de Waal signals a continuing decline of professional and ethical journalism which is an obstacle to widespread understanding of peace building efforts in Ethiopia. It undermines the intense pressure on the ground to reinstate lives and livelihoods to acceptable levels of survival. Recent speculative headlines include “Secret UN report reveals fears of long and bitter war in Ethiopia”, “Ethiopia PM rebuffs mediation attempts as Tigray deadline nears” and the persistent “Diplomats back claims Eritrean troops have joined Ethiopia”.

In conclusion, here is a recent tweet that serves as a reminder, of Mr Herman J Cohen who propelled the TPLF into power in 1991:

“Abiy needs to unify by delivering on his promise to create a federal system that provides the self-determination each state desires. And the TPLF needs to understand that it can no longer be an important political force, neither in #Ethiopia nor in Tigray.”

Posted by Wondimu Mekonnen at Tuesday, December 29, 2020 No comments: