TYRANT DICTATORS ARE PROBLEMS AND NOT PART OF THE SOLUTION

Ethiopians living in London came out in unison to protest against The Prime Misery of Ethiopia, Meles Zenawi, upon his arrival to sit among delegates coming from over 40 countries to take part in "Somalia Conference." Although African corrupt and dictatorial leaders had the chance to rub shoulders with leaders of the so called “democratic world” it is so painful to see murderer Meles Zenawi given a seat next to Mrs Hillary Clinton, US Secretary of State.

Meles is a thief, a murderer and a genocider who is in power by coercion. This is a man hated by every Ethiopian, including his own tribe, the Tigrayans[1]. It was interesting to note that the demonstrators raising the dust at Lancaster House, St James Park in London were entirely protesting against Meles, save a handful Syrian who joined them later, but nobody else. No leaders of other nations faced such humiliation, but Meles. This man is someone accused of genocide crime against humanity for what he had done to our brothers and sisters in Gambella. This is a man evicting forcefully more than a million Ethiopian citizens from their homes, relocating them in inhabitable malaria infected zones without any basic necessities for human race and selling their land to external agro-industrial conglomerates[2]. “Does the UK leadership read its own newspapers?” one wonders. Human Rights Watch cry for justice has been ignored by the Western nations, particularly by the USA and UK Government, two giant democratic nations, to whom the world looks up to for democratic governance. Amnesty International protest has been totally ignored. How can a democratic nation turns blind eyes to Meles’s atrocities and protest loudly about other dictators? “Democracy has no colour!” was the slogan of the protestors. The democracy the West preaches in Afganstan, Zimbabwe, Lybia, Egypt and else where is the samething that Ethiopians are demanding over the last 21 years. How long?

Ethiopians have already realised that the only option left to them is to uproot the tyrant through violence. That is why we see today blood-bath in the Ogaden region. The OLF had already resorted to ousting this criminal from power by force as Meles is attempting to jail all Oromo ethnic groups. Now, the Oromo language has become lingua franka of Meles’s prison, as per Mr Seye Abraha, a former TPLF high ranking official. The desperate Afars have already started taking hostages because their cry for justice has been ignored. This is the beginning of Somalisation of Ethiopia, unless the West does something with this tyrant. Another miserably failed state is on the making!

It is shame that Meles Zenawi has a free hand to do whatever he wishes with ordinary Ethiopians. Her has been quietly killing thousands. He has been jailing millions of innocent citizens. He has driven millions of us out of the country and subjected us to unwanted refugees life in Europe and America. He has subjugated the remaining people in the country to lead miserable life, by imposing a Gestapo type security, which kills, jails or make them disappear, those who attempt to speak up. He has unleashed his reign of terror in the country and made our citizens live under the constant shadow of fear. This is even worse than Colonel Mengistu’s regime. Colonel Mengistu’s regime would kill you or jail because it feared not to loose power. These ones kill you not only out of fear of losing power but also if you express love for your country. Ethiopia is the only place on Planet Earth where patriotism is a crime punishable by death! Woyyanes are national traitors who would one day stand before court accused of not only genocide but also treason.

Meles Zenawi came to Britain after caging journalists Reeyot Alemu, a columnist with the independent weekly Feteh, and Woubshet Taye, deputy editor of the now-defunct weekly Awramba Times, for 14 years in prison and 33,000 birrs (US$1,500)[3]. Even Elias, Kifle, a US citizen was not spared from being sentenced to life imprisonment in absentia. God knows what the United States Government makes out of all that, but the dictator sits comfortably next to The Secretary of State, rubbing his nose frequently and covering his mouth. What a bad manner! In front of his Muppet parliament, he acted like a prosecutor, judge and a jury against these journalists. He sentenced them before they were even brought before that Kangaroo Court. He also staged a drama called “Aceldama”[4].

He has also managed to cage two of his deadly critics: Journalist Eskinder Nega and Andualem Arage,  Head of Andinet Party’s public Relations Committee and UDJ Vice President, alongside, Nathnael Mekonnen, Asaminew Berhanu and Zemene Molla. Interestingly, those whom he sentenced in Absentia in the earlier drama again he included in this one Dr Berhanu Nega and Andargachew Tsigie. The funniest of all thingsl is the inclusion of Jouranalist Abebe Gelaw of Addis Voice. What pathetic souls Woyyanes are!. Abebe shragged the accusation simply be calling it: “The Mammo Kilo of Arat Kilo”[5]. We are not forgetting two Swedish freelance journalists, Johan Persson and Martin Schibbye who are now languishing in Woyyane jails for doing their jobs. Just before flying out to London, Meles got Andualem beaten up in captivity, in jail and left him unconscious[6]. Andualem’s life is now hanging on balance with fear that if he is taken in hospital, Meles may get him killed surreptitiously the same way he got Prof. Asrat Woldeyes killed. This is on top of the blood bath he caused in Gambella in 2003, in Addis Ababa in 2001 and 2005 and the massacres in Wolayita, Awasa, Endayesus and many others. This is a man whose hands are blood tainted sitting next to Hilary Clinton alongside Ban Ki Moon, David Cameroon and others. These peaceful people were charged under “Terrorism Act”[7] which Meles boasts of copying it from the United States and United Kingdom. Under this act, Shimelis Kamal, one of Meles’s partisan spokes person said that anyone who communicates with terrorist organisations (Ginbot 7, ONLF, OLF), sits and have a cup of coffee with them would be subject to this law[8]. It is interesting to mention that this very Shimelis Kamal shared the same house with Osman Hussein21 July 2005, while Kemal lived in London. In that case, he should also be classified as a terrorist then. Oh, not only that! The author of Terrorism Law, Meles Zenawi is actually the leader of a terrorist organisation[9]. It is not about the fact that he daily terrorises his own people, but his organisation has been classified so by the following American organisation. Meles is nothing but a face of terrorism.

Angry Ethiopians took to the street of London on 23 February 2012 to express their disgust with the leadership of free nation for allowing this tyrant sit among them, instead of hauling him to court in Hague. Early in the morning, Ethiopians flocked to Lancaster House to set up their banners and pictures of Woyyane victims. They demanded justice for the victims in Ethiopia by this very man that the West is flaunting like their darling boy. 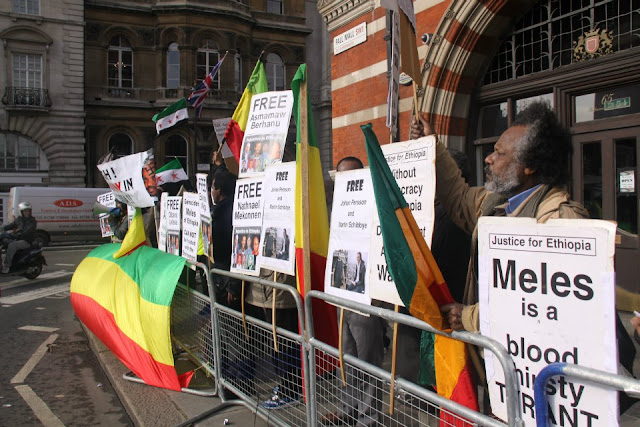 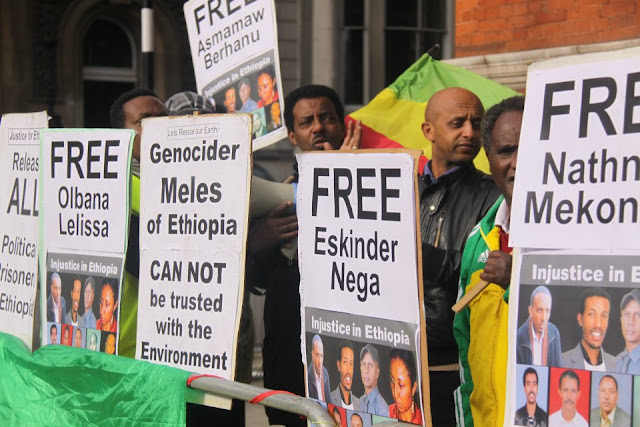 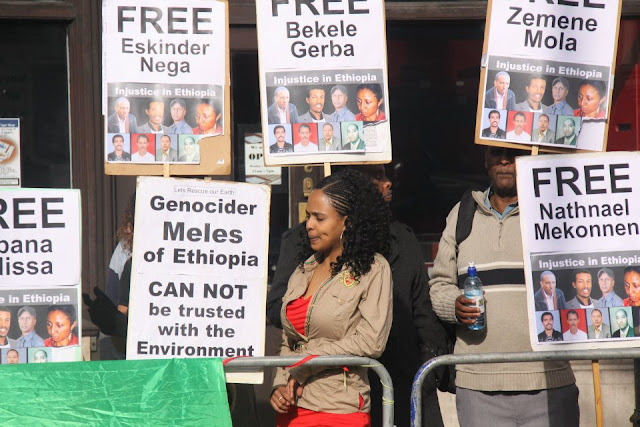 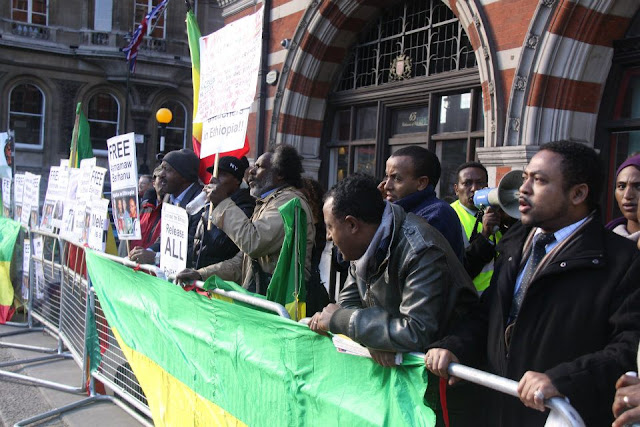 A well organised about 500 Somali contingent came and occupied its place sometime at mid-day turning the area into one chaotic hell of a place. They demanded “Hands of Somalia” including a demand that Meles took his army out of their country.

Ethiopians received solidarity from some Syrian group who later on joined them in demanding freedom for Ethiopians. Ethiopians also expressed solidarity with the Syrian people demanding the departure of Bashir-Al Assad and demanded to stop the carnage in that land.

All was going well until the club of tyrants started getting jittery. That made the protest full events. A Syrian Embassy car pooled over and the driver said something in Arabic, which was probably some sort of  rude expression. A Syrian protestor lost his temper and charged against the car to strike him with a stick used to hold up slogans. The Police scrambled to safe skin of the offender. 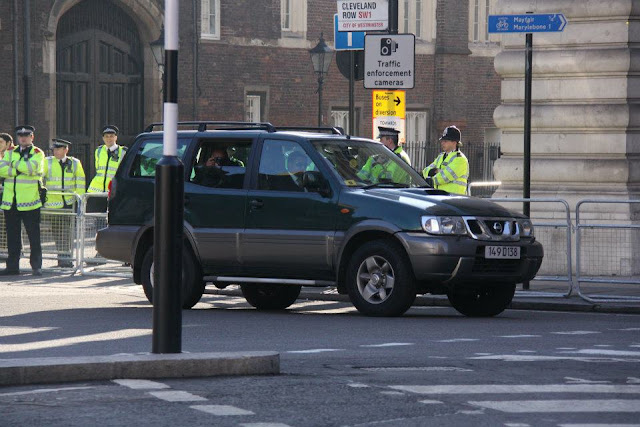 Woyyane rats also started showing up sheepishly. They tried their best to intimidate the protestors. They were seen going up and down in Embassy car, taking pictures of the demonstrators, to show their visibility which only ignited the fury of Ethiopians. 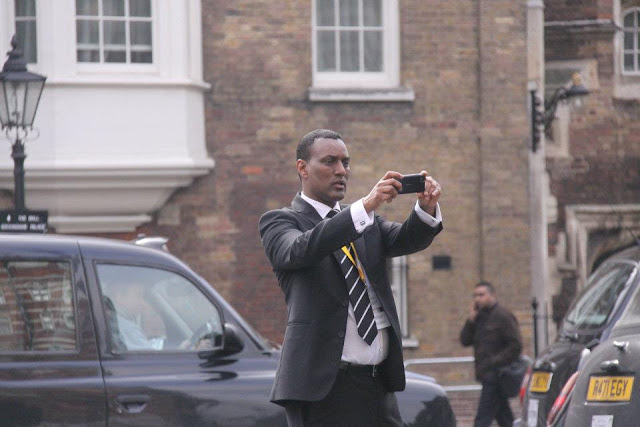 One mole, which was not known very much to Ethiopians showed up and started taking pictures from behind the Police Force. The protestors saw him but ignored him, even more resolute in keeping cool and composed and delivering the message to the delegates in side and to the journalists scrambling around. God only know what holes would hide these rats when the day of reckoning eventually dawns in Ethiopia. They took our pictures. They are gathering evidence to bring terrorism charge on Ethiopians living peacefully in Britain and demonstrating against the tyrant. We have their pictures too. They only live as long as Meles lives.

In conclusion, the demonstrators clearly reiterated to the public and journalists that were interested to know why they were protesting by re-iterating the fact that dictators, tyrants and human rights abusers are the problems themselves and cannot be taken as partners to the solution of such problem.

The demonstration that started at 9:00 in the morning was completed successfully at 3:00 in the afternoon. After making their point, Ethiopians dispersed peacefully.

You may find some videos from the demonstration at the following you-tube links.