On Friday, 09 September 2016, the Ethiopians in the UK did the unthinkable in London. The previous day, they stormed their way into the Tigray Liberation Front (Woyyane) occupied Ethiopian Embassy in London. Just 24 hours later peaceful protestors forced their way into the building of Foreign and Commonwealth Office of The United Kingdom (Foreign office). The Ethiopian protestors are known to be the most disciplined and a peaceful demonstrator so far in the UK but it is getting them nowhere. Such passive protest did fall on deaf ears of the authorities.

They did not storm the compound of the Foreign Office just for fun of it, but to protest against the continued silence and backhand support of the UK Government to keep the tyrant separatist regime in power in Ethiopia, whose crime has mounted to the level of the Nazis day by day. On 03 September 2016, the regimes security men burned down the Qilinto (Kilinto), Ethiopia’s high security prison, with its political inmates within. Although the regime admitted 23 inmates were burned down and 2 were shot while trying to escape[i], the number is much higher than that. As if that was not enough, those in power kept families in the dark with regards to the fate of their loved one. When wives and children went to the prison to enquire, the regime deployed the its army and went on beating spree. Many of the family members were injured, some were arrested tortured and other were chased away with baton and tear gas. This is fresh violation of human rights after the continuous killings of the peaceful protestors in Amara, Oromo and Ogaden regions and other parts of the country. It was this indifference of the UK Government that led to the overrunning of the UK Foreign Office. Watch https://youtu.be/ICHnqkLl6kE 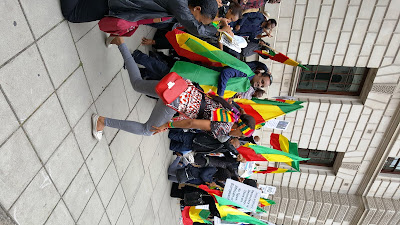 The Foreign Office completely misread the atmosphere. They thought it was just the usual periodical “Free Andargachew Tsige[ii]” demonstration of Ethiopians at the Foreign Office that has been going on for the last 800 days. Andargachew Tsige is a British citizen, who is being held incommunicado by the Ethiopian tyrannical regime somewhere in Addis Ababa, and is on a death row. On 23 June 2014, Andargachew Tsige was kidnapped by the TPLF and Yemeni security forces at Sana’a airport, while travelling from Dubai to Eritrea on his UK passport and forcibly removed to Addis Ababa. Ever since, Ethiopians in the UK have been regularly protesting, initially weekly, then fortnightly and recently monthly, turning up at the gate of Foreign Office to demand UK’s intervention to secure the freedom of their citizen. The UK government failed to secure Andargachew’s freedom, father of three. Instead, the UK government became very lenient towards the issue and continues business as with the tyrants, pouring billions of taxpayers’ money to keep them in power. This protest has become so routine that the Foreign Office did not even bother to call the Police to manage the crowed. Weeping and crying relatives of the perished men in prison could not hold back their frustration, therefore, they made their way to the gate and the rest followed them and ended up within the building.

Now the crime against humanity in Ethiopia has reached climax that Ethiopian protestors in the UK cannot be ignored any more. Regardless of the continuous human rights groups’ reports of thousands of killings, imprisonments, tortures and exiles in Ethiopia by the TPLF regime, the UK Government chose to ignore the whole things and kept on pumping tax payers’ money to keep the tyrants in power. Its recent stepping up of atrocities in Gondar and Gojjam, on top of what they had been doing to the Oromos for the last nine months drove the UK resident Ethiopians into fury. The terrorist regime in Ethiopia is, ironically, an ally of the UK in the fight against “terrorism” in neighbouring Somalia. As a result, the human rights violators seem to have been given free hand to terrorise their own unarmed people. Imagine, if what is currently happening in Ethiopia had happened in the Zimbabwe. The UK Government would have more vocal than any government in the world. Why is the apathy and double standard when it comes to Ethiopia? Very strange!

The UK just failed to grasp the feelings of Ethiopians while their relatives are massacred in broad day light in Ethiopia. Moreover, the TPLF terrorists had declared all out war on Amara, through their messenger boy, the so called “Prime Minister” publicly to crash the protest in Gonder and Gojjam, while the murder of the Oromos that had been going for  9 months continued, not to mention the murder of the Konsos, Ogadenese and Gambellans. The UK government keeps on still pumping thousands of pounds[iii] to support a regime that is totally rejected by the Ethiopian mass from North to South, from East to West. With that money, the regime trains its security forces to be used to evict citizens from their birthplaces and moving them elsewhere to make way for foreign land grabbers[iv], and also crush any uprising to protest against injustice. The following are such trained gunmen of Ethiopian regime. 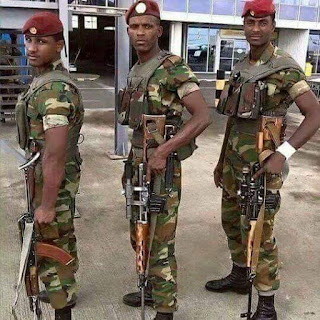 These merciless killers were specially trained to shoot and even children in the head, but nowhere else. All the victims’ wounds are so far seen on the head. From the way these murder squad act, they don’t seem to have been born of human being but some sort of creatures out of this world. They are like robots. When ordered to kill, they simply shoot aiming at the head. They are all equipped with semi-automatic dragnove svd sniper guns as explained by a military expert, Major Mammo Lemma[v] on ESAT television. This sniper guns should never have been used on civilians in cities but on enemy soldiers during war. The Ethiopian regime uses it on its citizens to quell any peaceful protest.

Here is a sample product of that. This poor girl was coming from school when she was murdered in cold blood. She was not a threat to these guys in any way. We have hundreds of such gruesome pictures. This is simply a target practice to shock. 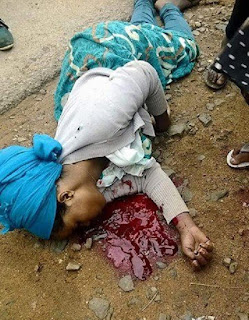 Both Aljazeera[vi] and BBC[vii] reported that hundreds killed, but the UK government, the biggest donor country of Ethiopia is not saying or doing much, apart from telling us they have been doing “quiet diplomacy”, with just empty lip-service of “We are concerned”. Concern alone does not matter.

Amnesty International issued a press release on 30 August 2016 that “a group of civil society organizations are calling for an independent and impartial international investigation into human rights violations in Ethiopia, including the unlawful killing of peaceful protesters and a recent spate of arrests of civil society members documenting this crackdown.” The killing of thousand of Ethiopia has left the whole nation; particularly the mothers in shock and tears. Regardless of the slaughter of unarmed civilians, Ethiopian are protesting everywhere. Ethiopians are asking the UK to stop sponsoring state terrorism in Ethiopia. 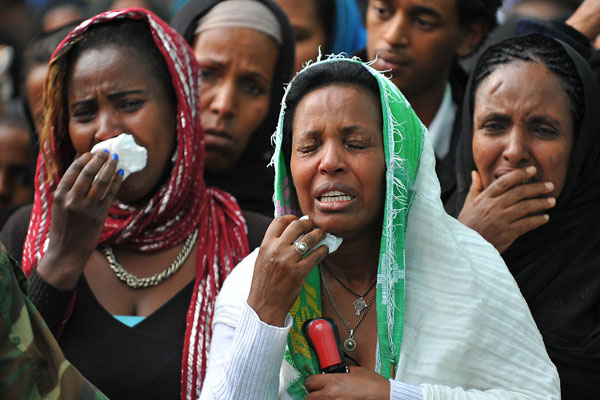 As long as the UK keeps on pumping money to sustain the brutal regime in Ethiopia, the killing would continue and Ethiopians will fight on to free themselves from tyranny. Therefore, Ethiopians are asking those of us residing in the UK to pass their message to the tax payers of the UK, to hold their Government accountable for spending their money on a regime that kills and maims its own civilian citizens. The people of the UK, unlike the Government of the time, stood by the Ethiopians during the 1935 Italian invasion; they hope they would do the same now

Remember! Mubarak of Egypt was the darling of the West. To the last minute, the US and UK Governments were his best supporters, just telling him to restrain from violence and that was all. When the popular uprising removed him, these two superpowers have to work hard to face angry Egyptians. Unless the UK takes the right steps to distance itself from the brutal regime, they are going to face very angry Ethiopians. Tyranny should not be condoned but condemned. The time is now!

Ethiopia shall be free!