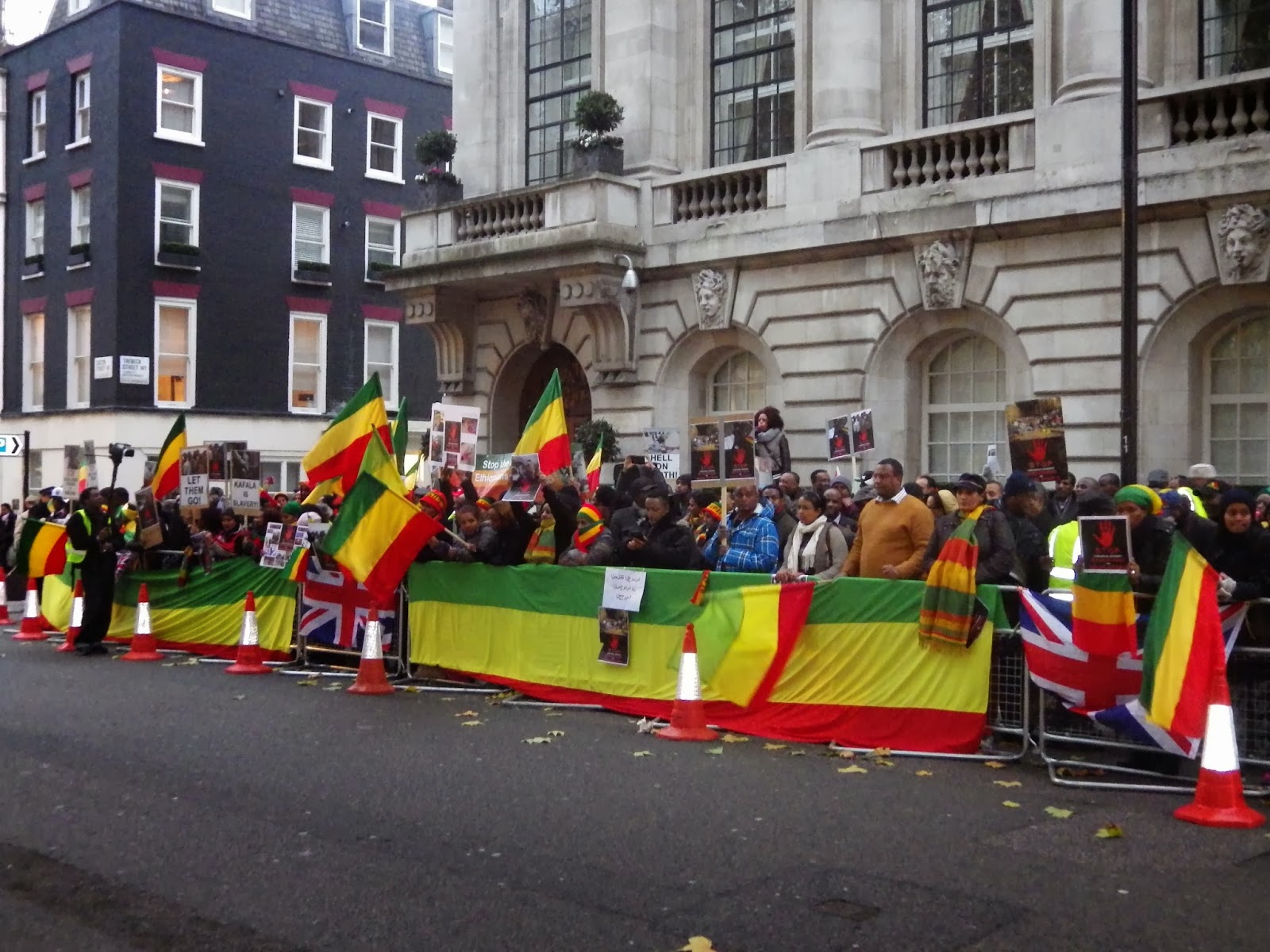 London residents of Ethiopia came out again on 2 December 2013 to protest in front of the Saudi Arabian Embassy for the 2nd time in less than 10 days. Although we are aware that some Ethiopians have been transported to Addis Ababa, there are still tens of thousands of Ethiopian immigrants in captivity in that Kingdom, held in subhuman conditions, without food, and sanitary for women. Horrendous news trickling out to the rest of the world through various sources tells gross violation of human rights in that Kingdom, targeting particularly Ethiopians as if Ethiopians. The Muslim script quotes their Prophet saying: “"Leave the Ahbash (Abyssinians or Ethiopians) alone so long as they do not disturb you, for no one will recover the treasure of the Ka'ba, except Zul-Suwayqatayn from Abyssinia.”
("ترك أهباش (أبيسينيانس أو الإثيوبيين) وحدها طالما أنها لا تخل لك، لأن لا أحد سوعدا ذو-سووايقاتاين من الحبشة. ف استرداد كنز (الكعبة، ما

Contrary to all that, the prophet’s followers, the keepers of the faith, Saudi Arabian government and citizens targeted Ethiopians and victimised, murdered the men and gang-raped the women. This is a disgrace and the most shameful act of transgression against humanity on the part of Saudi Arabia.
Ethiopians demanded to end the murder, the gang rape and treat Ethiopians like human beings, rather than what their citizens uttered in public beating up Ethiopians. The following link leads to a video showing a tangible evidence of the vibrant demonstration in London.

Among the demonstrators there were guests from other nations, who joined Ethiopians to show their solidarity with Ethiopian victims in Saudi Arabia. One such Muslim demonstrator in solidarity with Ethiopians spelt out how Islam owes Ethiopia, for she gave shelter and protected followers of the Prophet from those who wanted to kill them. He led the demonstrators in shouting the slogans in support of Ethiopian victims in Saudi Arabia. He made a moving solidarity speech with Ethiopians, the country that was the cause for his faith to survive.  He pointed out that The Prophet sent his persecuted men and women to Ethiopia, land of justice, who was ruled by a just King. He said he himself worked in Jeddah, in the land where there is no justice. He said Ethiopia shall overcome this disgrace because she stretches her hands unto God. He concluded with a slogan “Viva Ethiopia!” 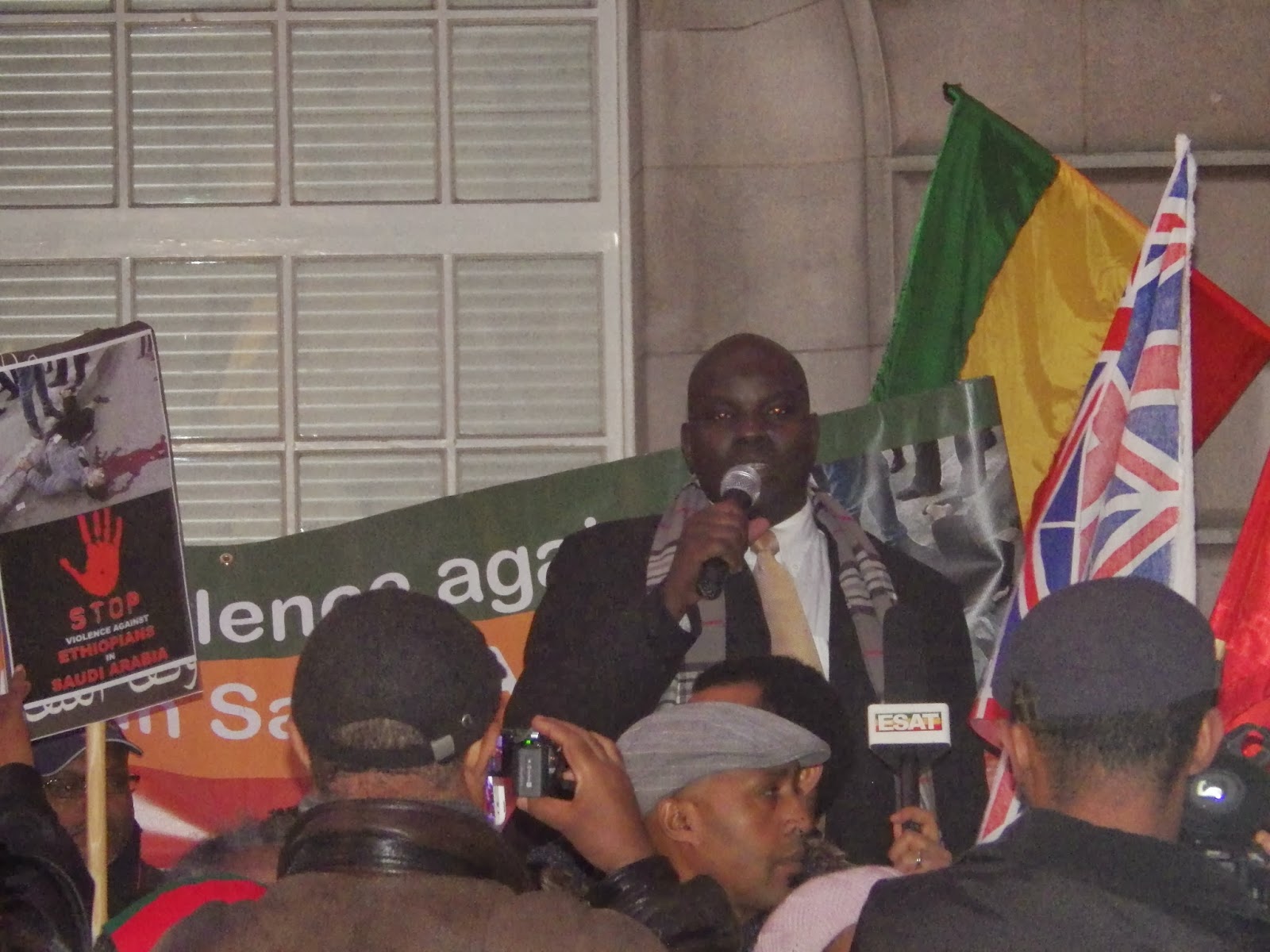 Another speaker was our own brother, Obang Metho, the leader of Solidarity Movement for a New Ethiopia, all the way from Canada. Obang, with his usual moving speech cheered the crowed by expressing how happy he was to be among his compatriots voicing for the voiceless victims in Saudi Arabia. He reminded the Saudis that Ethiopians are human beings just like them and not dogs as they were seen uttering on videos he watched while they were savagely beating up Ethiopians. He demanded that Saudi learn how to treat human beings, particularly his unfortunate fellow Ethiopians that ended up in their country for work but nothing else. He also reminded the Ethiopian regime that it would be held responsible for the mess, the national humiliation in reference to what had happened to our brothers and sisters in Saudi Arabia. Ethiopians would have never left their country had the regime was responsible enough to take care of its citizens rather than persecuting them. He reminded all Ethiopians to stand together regardless of their ethnic background, as humanity comes before ethnicity. He stressed that no one would be free until everybody is free. Obang called for national reconciliation, including the brutal regime itself, to get out of the quagmire we all found ourselves in. He concluded his moving speech with “ኢትዮጵያ ለዘለዓለም ትኑር!”

Dr Bekele Gessesse, a well-respected Ethiopian in London had to take off his clothes above waist in the chilling December London cold weather, to share the pain and suffering of his brothers and sisters in Saudi Arabia, regardless of the protestors attempt to prevent him from doing so, fearing for his own health and safety (Flicker picture IMGP350). He did it anyway and demanded that the Saudis stop that barbaric act of murdering and raping innocent Ethiopians whom misfortune led them to that Kingdom of Hell. He was fighting back his tears while speaking.

There was a very moving speech from our brave sister, Hirut Mesfin, who was so much disgusted with Saudi Arabian act of transgression against her brothers and sisters in Saudi Arabia. She alerted the demonstrators on the fact that right then, about 30,000 Ethiopians had been robbed of their possessions, dignity and hoarded by Saudi Police like animals, transported to the dessert on the border with Yemen and left there unprotected in the open air without water, food or any shelter. She also said the Saudi Arabians, as members of the United Nations should be acting like one, responsible enough to restrain themselves from carrying out such a barbaric act against humanity. She demanded to stop the racial profiling. She demanded to stop practising slavery and join the 21st century. She told Saudi Arabians that they had money but lacked humanity. Hirut electrified the place with an emotional speech that clearly spelt out that what had taken place in Saudi Arabia was “Holocaust 2013”, carried out against Ethiopians. It was an act of genocide. The Ethiopians who went there looking for work. And they did work for them as loyal maids and servants.  She questioned where the United Nations was when such gross violation of human rights was perpetrated by one of their member states against human beings! She also questioned the International Labour Organisation on their silence when such inhuman act of barbarism was carried out against migrant workers in Saudi Arabia.

The fight to rescue Ethiopians from murder, rape and torture in Saudi Arabia continues until the last Ethiopian is taken out of that hell on earth.